Based on open source material and testimony from recent defectors, the aim of this post is to provide an insight into the current state of al-Shabaab (aS).

As we enter Ramadan, a period that is traditionally accompanied by an upsurge in violence, and then the 2016 Elections period (due to conclude on 20AUG16) and which will, inevitably, also be the focus of aS operations, it is useful to assess the state of aS. However, this is only an assessment: it is based on the limited sources available and it should not, therefore, guaranteed to be completely accurate nor should strategic decisions be based upon it.

At the same time, this does not represent the views of any institution or any individual other than Our Man on the Horn.

Despite losing a considerable amount of territory, aS still retains control of about 20% of the South/Central Somalia including the Jubba River Valley, as illustrated by the two AMISOM-produced maps below.

In particular, aS remains capable of mounting attacks against the Federal Government of Somalia (FGS), the Somali security forces, the African Union Mission in Somalia (AMISOM), the international community and neighbouring countries. aS faces many challenges: but is by no means a spent force since, like many terrorist groups, it is flexible, scalable and survivable.

In terms of numbers, aS is estimated to have at most 13-14,000 personnel, although many are merely supporters or involved in non-combat activities. But anything up to half are members of Jabahaat (military wing) or Amniyat (secret police/ intelligence).

In terms of demographics, the majority of foot soldiers are aged 15-25, have at best primary level education and are from rural backgrounds. Reasons for joining vary: financial, for adventure, grievance-based vengeance, nationalist impulses, religious ideology or simply that they were ordered to join by elders as part of clan commitments to provide fighters. Commanders, on the other hand, are generally better educated, more ideologically motivated and have strong links to other, more senior commanders.

A representation of the overall governance structure of al-Shabaab, which is by no means exhaustive, is given below.

This structure is fluid, reflecting the changing needs of the organisation; elements are added and removed as required. In 2009, for instance, the Foreign Fighters office was created to appease a senior leader, Nabha. Its commander was added into the Executive in order to contain the potential threat from that volatile group.

Each element has its own individual structure that fits its task but all are designed to be robust, with at least two deputies under each minister/Emir. This is presumably designed to address the reality of the situation for the leadership of al-Shabaab: they regularly meet an untimely death. However, this also allows for the regular rotation of personnel without a loss of institutional knowledge.

Jabahaat (Defence) is particularly interesting. Using up roughly 70% of the outputs of Finance’s activities, Jabahaat apparently mimics the structure of the Ethiopian military (various entities were studied and the ENDF was agreed to be the most relevant to the formative al-Shabaab). The structure of Jabahaat is shown below. 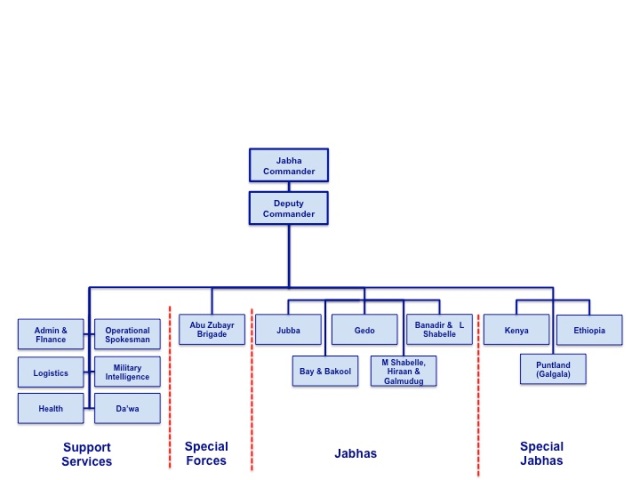 As well as five regional Jabhas (Divisons/Brigades) covering the areas that al-Shabaab currently or up until recently controlled (and where it often still operates – such as Mogadishu city), three additional Special Jabhas cover other territories of interest to al-Shabaab: Puntland in north eastern Somalia, Ethiopia and Kenya.

However, these ‘Special Jabhas’ should not be confused with the Special Forces Brigade used in the attacks on AMISOM positions in Southern Somalia. Commonly referred to as the ‘Abu Zubayr Brigade’ (in memory of the former leader of aS, Godane, killed in a US drone strike on 01SEP14). This regular unit leads large-scale attacks on isolated AMISOM & SNA positions in the hinterland of South/Central Somalia (such as the recent Leego, Janaale and El Adde attacks). It is viewed as being an ‘elite’ unit and is modelled, ironically, on Israeli Special Forces. (Occasionally the brigade uses the name Nabha Brigade as a provocation to the Kenyans – Nabha was a Kenyan-Somali, so this alias was eminently suitable for the attack on the Kenyan forces at El Adde.)

Being a member of the Abu Zubayr Brigade brings benefits beyond the mere kudos of being in an elite unit: those who participated in the recent attack on the AMISOM (KDF) position at El Adde apparently received a $400 bonus and 2 months leave; commanders were promoted.

aS currently faces many challenges. Many revenue streams have been lost or have dwindled. Illicit trade in charcoal, counterfeit goods and smuggling have all been interfered with by aS’s loss of control of the Somali littoral and the counter piracy maritime blockade means aS can no longer levy harbour fees on pirate gangs.

(However, despite numerous media stories to the contrary, it should be noted that there is no convincing evidence of ivory/endangered species smuggling.)

aS is also suffering the effects of attrition in two ways: members being killed or captured and defections (both leaders and foot-soldiers). The effects of attrition are all too clearly seen in the increasing recruitment (possibly press-ganging) of younger rural males, many of whom are, by western definition, child soldiers (although aS defines adulthood as being aged 15 years or older).

Strikes (the use of air power – drones and so on- and, increasingly, Special Forces raids), while controversial due to misuse/negligence in other theatres, are causing significant losses to the organisation. According to recent defectors, strikes are also having an effect on morale at all levels, a reflection of aS’s lack of air power, and absence of effective anti-aircraft systems and the inability to function at night. Strikes also cause significant disruption to aS communications and general pattern of life (avoiding concentrations, eschewing the use of cellphones and so on).

On the other hand, defections are also undermining aS’s ability to operate. Defections prompt resource intensive internal policing and purges, the promote distrust while at the same time posing little risk to the FGS and its allies. Significantly, in the last 18 months hundreds of footsoldiers have defected as well as 14 leaders (3 senior, 11 mid-level). Even more significant is the fact that those leaders come from a variety of clans, roles and locations. This is a trend, not a glitch.

The final challenge for aS is of an ideological and therefore potentially existential nature. aS continues to go through a period of internal friction over its future direction: is it still part of the global jihad, linked to al-Qa’ida? or is it a nationalist organisation fighting to rid the country of foreign invaders and their apostate lackies?

More recently, another schism has emerged: should aS remain loyal to al-Qa’ida or shift its support to IS/Da’esh, as one clan-focussed faction has done? aS is currently rife with barely suppressed divisions.

However, aS is by no means finished as a violent insurgent force in Somalia and the region. aS continues to be able to operate with ease across the frontlines into FGS controlled areas and across borders into similarly volatile neighbouring countries such as Kenya and Yemen. It has also proven itself to be flexible, scalable and survivable, and this has allowed aS to continue to conduct not one but three lines of operation. ‘The 3-Pronged Approach’ that aS operates consists of urban terrorism, rural guerrilla warfare and transnational sectarianism.

aS specialises in the ‘propaganda of the deed’. Using urban terrorism as an example, since abandoning the city of Mogadishu in 2011, aS has mounted a campaign attacks against significant individuals (MPs, senior security forces personnel and so on), institutions, key locations (especially hotels) and high profile groups in society (journalists, women, the international community and so on).

For example, attacks in the city of Mogadishu in the first quarter of 2015 are shown below:

This meant that every 10-14 days aS mounted a High Profile Attack (HPA). While not all were successful and even some successful attacks yielded little in terms of casualties other than the attackers, the symbolism of being able to operate in the capital with impunity had the desired effect on public confidence. After a lull, it is worth noting that aS’s tempo of attacks is once again nearing early 2015 levels.

aS is also effective at communicating in ways other than attacks. aS retains a clear, consistent & simple ideology (outwardly at least) that remains attractive in isolated components, especially to those with limited perspectives (rural population, some Diaspora). aS has clear, simple lines of messaging that resonate: they are the most Somali, the most religious, the most capable of providing security and the most capable of providing services. aS messages at a high tempo in each of these areas concurrently.

aS also has a very effective mass communications operation which (its own organic production capability, al-Kataib) produces high quality one-off video products for distribution on the internet. Notable recent products include the foiled French SF Raid, the assault on Kodha Island, the attack on Westgate Mall in Nairobi, the cross-border incursion into Lamu County in Kenya and the over-running of the AMISOM bases at Leego, Janaale and El Adde. Products are produced in Somali, Arabic, Swahili and English.

Kodha Island is notable as it proves that aS actually does something that many institutions claim but actually never do: aS places the effect on public perception at the heart of their operational planning. This makes them considerably more adept than those they oppose. There was no reason to invade Kodha Island, except to produce a video product: no tactical gain (they left after 3 days), no resource to be purloined, no key individuals to be killed or captured. Just to make a video.

The final factor to be considered is the emergence of a dissident faction that has instead sworn allegiance to IS/Da’esh.

This group was initially small in number (28) and focussed entirely on a disaffected group of Darood in the Galgala Mountains of Puntland. Others have since joined them but it is assessed that the group still numbers less than 100. While aS reacted cautiously to the initial declaration, responding only with statements from senior figures, it was soon realised that the IS/Da’esh faction had gained some traction and a purge was launched.

Many of those who have attempted to join the IS/Da’esh faction have been victims of the purge, leaders being executed and foot soldiers being sent for ‘re-education’. Some foreign fighters (a term that aS uses to refer to members of the Somali Diaspora as well as the small number of non-ethnic Somalis in the organisation) have deserted and attempted to join IS/Da’esh in Puntland or elsewhere and have been captured by the government. aS’s recent ill-thought through amphibious assault on Puntland is thought to have been focussed on wiping out the IS/Da’esh faction, although it ended in an ignominious failure.

The IS/Da’esh issue is by no means yet resolved in aS’s favour. However, the media coverage, possibly stoked by the actions of some government institutions and elements of the international community, has been hysterical and has grossly over-inflated the strength and influence of the IS/Da’esh faction. This may, unfortunately, have the effect of allowing the IS/Da’esh faction to establish itself permanently in Somalia.