On the anniversary of the Charlie Hebdo attacks, by far the best and most balanced, insightful response I saw at the time was cartoonist, Joe Sacco’s ‘On Satire’. By all means post ‘Je Suis..’ or colour in your F*c*book profile pic – but they don’t require deep thought about what is really going on. 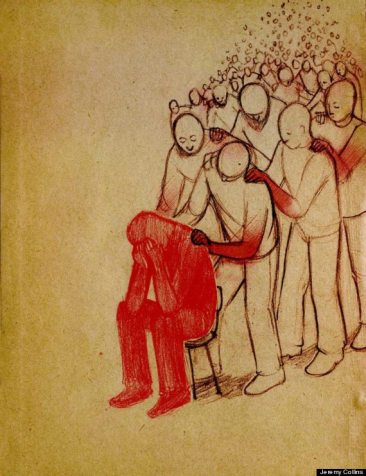 ‘Someone asked me, what would have been the make-up of your ideal platoon – athletes? No, I said: poets.’

At times like these I would suggest we might do better to listen to the poets, rather than the politicians, the soldiers, the commentators et al. With that in mind, my favourite living poet, Warsan Shire, in the aftermath of the London riots:

what they did yesterday afternoon, by warsan shire

they set my aunts house on fire

i cried the way women on tv do

folding at the middle

i called the boy who use to love me

tried to ‘okay’ my voice

i come from two countries

the other is on fire

i held an atlas in my lap

ran my fingers across the whole world

where does it hurt?